ONE: Why True Biblical Unity Is Essential (click here)

This site is designed to encourage those who hold a biblical worldview that recognizes Jesus as the one and only Son of God and that He was God incarnate. He came to teach us, but, more importantly, to ransom us back to the Father.

So, we’re not pushing for some sort of unity where people from various religions can be united. Jesus was clear that there is just one way to the Father: Himself. Neither Buddha nor Mohammed nor any other religious leader offered themselves as a sacrifice for our sins. Only Jesus did that.

We are also not encouraging Christians to spiritually collaborate with, for example, Mormons—who say they are Christians, but hold beliefs that are clearly contrary to the Bible.

And it should be noted that there are even those who declare themselves to be Christians, but refuse to acknowledge things that the Bible calls sin. For example, in 1 Corinthians 6:9-10, the Apostle Paul names specific sins like sexually immorality, idolatry, adultery, homosexuality, stealing, being greedy and others. If we pretend that the things that Scripture says are sin are not actually sin—and that those things don’t ultimately separate us from God—then we have undermined the whole point of the gospel message. Without the cross—without the saving work of Jesus’ blood because of our sins—we have no hope for eternity and we have no basis for any honest unity here and now.

Having said all that, the Holy Spirit is breathing His life into the Church today. And that would include many various segments of the Body of Christ. From mainline denominations, to truly evangelical (Bible believing) churches, to Pentecostal and nondenominational congregations, the Lord is sovereignly drawing His Body into a greater dimension of unity.

To that end, we are simply jumping on board with what the Holy Spirit is already doing. Won’t you join us? 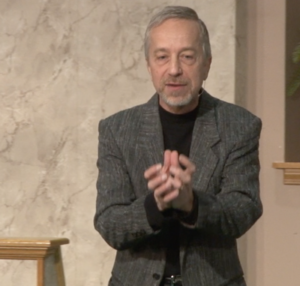 There are relatively few people who have had the scope of ministry experience that Tom Kraeuter has had. He has

Such a diverse ministry experience gives him a unique perspective on unity in the Body of Christ.

“Having ministered in so many different types of Christian churches – Baptist, Methodist, Lutheran, Mennonite, Pentecostal, Vineyard, and so many others – it seems such a shame that we each have so much to offer, yet we tend to hold one another at arm’s length,” says Tom. “That hasn’t worked out well in the past for the Church. Maybe it’s time to try a different approach.”

Tom has seen what can happen when members of a congregation act in a selfless manner – like Jesus. He’s even witnessed multiple Christian churches working together with one another as a more complete expression of the Body of Christ. Because of this – and because of the prevalence in the Bible of the idea of Christians being united – Tom believes that there is far more that the Church has yet to experience.

An Amazing Revival … Because of Unity

What would you do if the government confiscated all the Christian churches in your city?

Further, what if they said that all Christ-followers would have to worship together in one location, regardless of denominational affiliation? (book)

Have you ever encountered terrorists in your church? Not guys walking around with AK47s, ready to blast people to smithereens. Church terrorists don’t highjack jets or use explosives. However, they are just as destructive. (book)

ONE: Why True Biblical Unity Is Essential (video series)